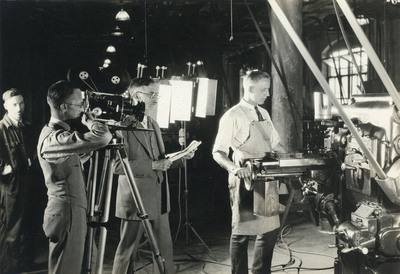 Still from production of an industrial film, “Directing a scene in ‘Industrial Waste,’ a picture made for the Allied Metal Trade.” (See MPE-P-006-01) Carl Gregory is directing and Fred Barber was the cameraman for the production, although it looks like Gregory is cranking the Bell & Howell 2709 motion picture camera [trick photography?]. [Produced by B&H in 1911. Its unique features included the first use of a body machined from cast aluminum, a four lens turret and a rack-over system, giving precise through-the-lens viewing and focusing. It had 400ft twin compartment magazines [later 1,000ft]. The film movement was quite different to any that had been before; a 'shuttle gate' clamped on the film and lifted it forward, depositing its perforations on fixed register pins for each advance of a frame. This was in fact the first camera to have register pins holding the film completely steady and in a precise position.] 1920s.