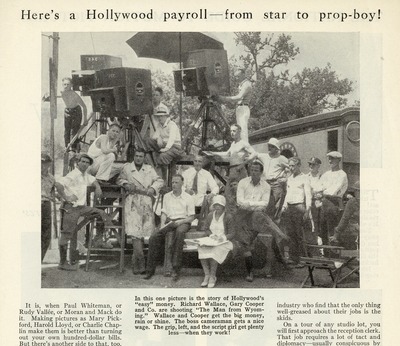 Magazine article: “Here’s a Hollywood Payroll—From Star to Prop Boy” – stars Richard Wallace and Gary Cooper get the big money. Photograph taken on the set of “The Man from Wyoming,” a film shot on the Paramount Ranch. Continuation missing. [In 1927, Paramount Pictures purchased 2,700 acres of the old Rancho Las Virgenes [Agoura Hills, California] for use as a “movie ranch.” For 25 years a veritable who’s who of Hollywood practiced their craft at the location and made use of the diverse landscape.] Magazine not identified, 1930. Verso has reviews of three new motion pictures, “Resurrection,” “Gentleman’s Fate,” and “City Lights.”