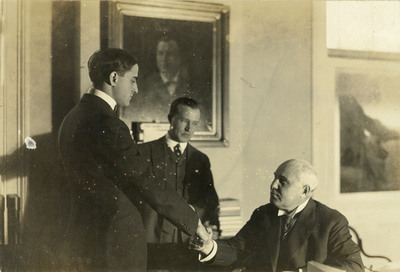 Photograph of unidentified man, William Ray Johnson [center] with Franklin L. Lane, the 26th Secretary of the Interior (1913-1920), ca. 1915. Johnson worked as a financial manager and actor for Thanhouser 1913-1917; he was appointed assistant to Charles Hite, Thanhouser president and chief executive officer in 1914. Thanhouser prepared a series of one-reel documentary films on Yellowstone National Park in 1915, introduced by Lane, to be a part of the “Our Own Country” series, but may have not seen distribution.