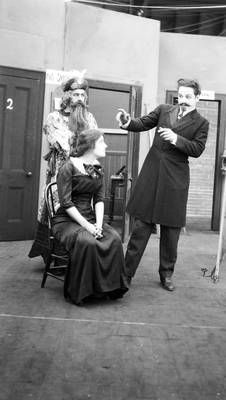 Production still from Thanhouser Company’s “Hypnotized” featuring William Russell. Released December 30, 1910. Size: 5.5” x 3.25” SYNOPSIS, The Moving Picture World, December 31, 1910: "May Smalley is a simple little country girl with whom Jack, a youth whom she has known since childhood, is very much in love. When a traveling show, consisting of a hypnotist and a Hindu magician comes to the opera house in her little town, the two young people are among the other interested spectators who flock to see the performance. May's youth and beauty attract the hypnotist, who plans to lure her away from her home. He sends May a message that he has a communication for her from the spirit world. Against the protest of Jack, her escort, May goes behind the scenes after the performance to meet with the great hypnotist, who fascinates her with his wiles. The hypnotist is an unscrupulous villain, and seeing that May is thoroughly impressed with his few tricks and considers him quite superhuman, he induces her to follow him when he leaves the town. "How Jack proves himself to be a youth of resource as well as courage, the important part he played in May's deliverance by the Hindu fakir, is well told by the picture. Finally the hypnotist is shown in his true light. May is disillusioned, and comes to decide that Jack is just about the kind of protection she needs in a world of uncertainty."