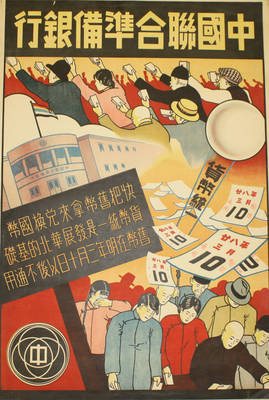 Propaganda poster, in Chinese, produced by Japanese-sponsored governments in China during Sino-Japanese War (1937-1945). These governments were established by major Japanese military commands, and posters were used to promote cooperation between Chinese and Japanese. English translation is “United Reserve Bank of China.” Chinese: 中國聯合準備銀行. In small letters, English translation is “Convert your old bills to the new currency, monetary unification is the foundation of North China’s development, old currency will no longer be valid after March 10th, 1939.” Chinese: 快把舊幣拿來兌換國幣，貨幣統一是發展華北的基礎，舊幣在明年三月十日以後不通用. In March 1938, The United Reserve Bank of China was established in Beijing by the Provisional Government of the Republic of China. It was one of the Japanese Puppet Banks.

Translations made by Wenling Tseng, M.L.S.